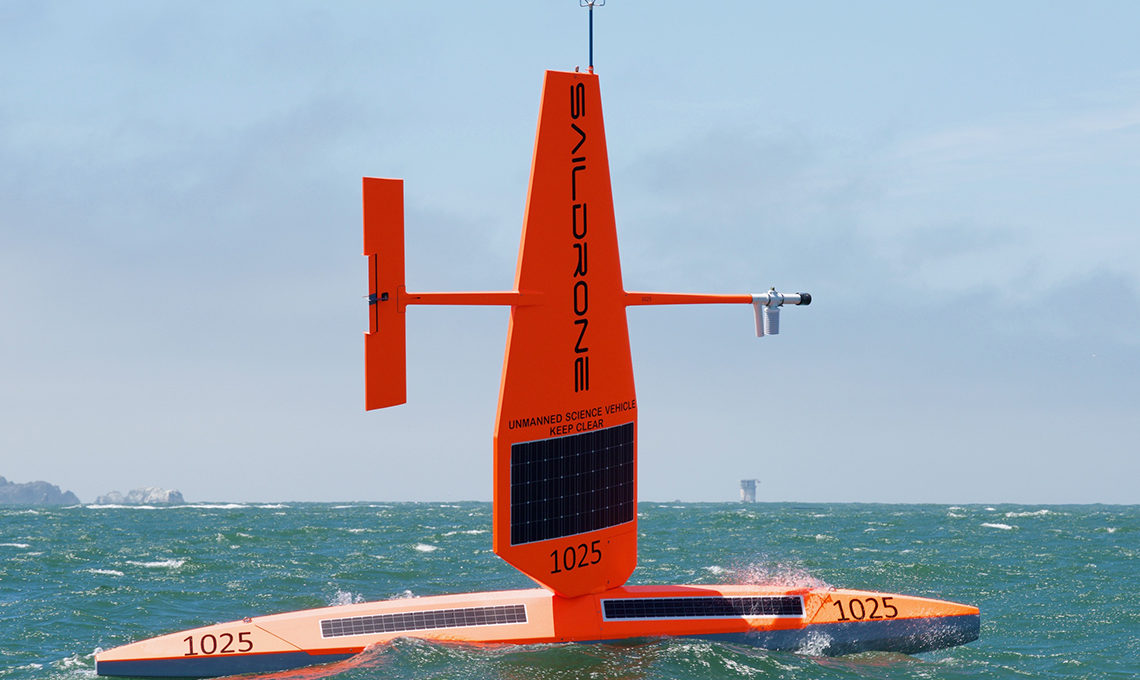 Thanks to a settlement-free interconnection (SFI) agreement between CENIC and the City of Alameda in Northern California, students in Alameda and Contra Costa Counties will get to work with first-of-its-kind data captured from autonomous ocean vehicles studying everything from marine wildlife to climate models.

Unmanned surface vehicles (USVs), manufactured by startup Saildrone at Alameda Point, are equipped with onboard cameras and oceanographic and atmospheric sensors and deployed across the globe to collect a trove of in-situ ocean data. In August 2019, a Saildrone robot completed the first-ever autonomous circumnavigation of Antarctica, capturing new details about the Southern Ocean that could be key to our understanding of climate change. In addition, the National Oceanic and Atmospheric Administration (NOAA) uses the sailing drones for acoustic fish surveys, long-range oil spill detection, and early prediction of major weather events.

Saildrone collects an astonishing amount of real-time data and is in the process of developing partnerships with scientists at the nearby US Department of Energy’s Lawrence Berkeley National Laboratory for access to next-generation supercomputers. That’s where CENIC comes in. The SFI between the City of Alameda’s Internet network and CENIC’s California Research and Education Network (CalREN) provides Saildrone the high-bandwidth connectivity it needs to upload data to cloud storage, and other governmental partners such as NOAA and the Berkeley Lab the ability to efficiently access that data remotely.

CENIC has cultivated hundreds of peering relationships with other network operators, including many of the largest Internet, cloud, content, research, and educational organizations, to enhance network performance, increase cost savings, and expand collaboration opportunities. The Internet is made up of thousands of separate networks that operate under a common framework, with many networks paying to exchange traffic. This SFI has two networks agreeing to exchange traffic without having to pay a third party to carry traffic across the more general Internet.

Peering with the City of Alameda will enable sharing of Saildrone’s data not only with Berkeley Lab, but also with students at K-12 schools, community colleges, and universities on CENIC’s network. The two-year SFI agreement between CENIC and Alameda is a model for other local governments that may wish to connect technology and research and development companies in their region with a state’s research and education institutions.

“It’s an opportunity for the lab to connect with interesting companies that are measuring the world like Saildrone, and to use the open science data to support our mission, which is to solve some of the world’s biggest challenges in fields such as environmental science and energy efficiency,” said Andrew Wiedlea, Berkeley Lab department head for user support. “At the same time, it’s an opportunity for schools to connect with us and to develop opportunities in science, technology, engineering, and math (STEM).”​

The Alameda County Office of Education, which provides access to its node site on the CalREN network as part of this partnership, is working with Saildrone and Berkeley Lab to develop curriculum to prepare high school students to work in advanced manufacturing, statistics, and big data. “Big data” encompasses emergent technologies dependent on crunching vast quantities of data, including artificial intelligence (AI), virtual reality (VR), and the Internet of Things (IoT).

Dr. Chris Boynton, executive director of the Pathways to College and Career Program at ACOE, said students would explore real-world problems and individual design projects that analyze the Saildrone data to find solutions. Makerspaces, equipped with 3D printers, laser cutters, virtual reality programs, and other manufacturing and computing tools, will provide hands-on ways for students to experiment, build, and invent as they deeply engage in science and engineering.

“The idea is to introduce young people to the field of big data and to help them understand how to manage big data and how to query it because just having a bunch of data doesn’t mean anything on its own. You make it mean something with how you interpret it,” said Boynton. “For instance, you could have a thousand temperature readings from the water off the coast of San Francisco. That’s just data until you tie those temperatures with geolocations, and you look at a map and see that the surface waters are rising in temperature. Then you can say: What are the fish doing? What does that mean for fishing and the price of fish in the market? Those are things that students could think about and do.”

ACOE received a K-12 Strong Workforce Program “STEAM Ahead” grant for $566,000 from the California Community Colleges Chancellor’s Office, with Saildrone committing $70,000 in matching funds. The grant aims to create career pathways from high school to community colleges to middle-skills jobs at local IT or manufacturing companies. Middle-skills jobs require more education and training than a high school diploma but less than a four-year college degree. Job forecasts for Alameda and Contra Costa Counties cite computer-related jobs as the second-fastest growing occupational field, behind only health care.

The nearby College of Alameda is at the forefront of two-year big data programs. “CoA is one of the only community colleges that has a big-data program, and as far as I know, we’re the only K-12 schools creating this kind of career pathway,” Boynton said. “This is new and innovative.”

The grant is specifically aimed at training under-represented populations for local technology jobs. Only 13% of technology workers in the Bay Area are home-grown, and less than 3% are African American. “We want to make sure that these opportunities are equitable, and all students have access to this material,” Boynton said. ACOE is incubating Alignment Bay Area, a collaborative project involving leaders of industry, school districts, colleges, and labor and community organizations. A goal is for every Bay Area student to earn a sustaining wage by the time they’re 25 years old.

As part of CENIC’s agreement with Alameda, R&D and tech companies interested in locating at Alameda Point and peering with the CENIC network are required to offer student internships. Ultimately, this could give high school and community college students the ability to work at companies like Saildrone or Berkeley Lab. “We want to build a relationship with area schools, get students interested in the national lab, and then be able to hire them for summer opportunities and as staff members when they graduate,” Wiedlea said.

Students will not only learn from scientists but also learn about the information technology roles required to support them. “As part of that, you have to understand: How do sensors work? How does backhaul happen, and how do you run an ingest pipeline? How do you make sense of data? How do you save data, and how do you make data available for analytics?” added Wiedlea. “There are many general skills that students can learn from the lab or a company like Saildrone through the CENIC project.”

The City of Alameda hopes that the SFI agreement with CENIC will attract other R&D and technology companies to Alameda Point, an area the city is trying to revitalize after a naval air station there was shuttered. Over the two-year agreement, the city plans to track the number of resulting internships and jobs.

ACOE Director of Information Technology Ryan Choate said K-12 schools across California could similarly partner with area research institutions to connect students with real-world science. “This is one research institution willing to do it — the possibilities are endless,” he said. “Research facilities and colleges have unique programs that should be shared and pushed out to schools. There’s enormous potential for the CalREN network to connect the two, and I think we’re underutilizing it.”

Boynton credited Saildrone for taking the time and energy to work with the educational system. “That’s an industry leader,” she said. “If we want to raise talent for local companies, we need to know what they need, and local companies need to be willing to take the time to work with us.”