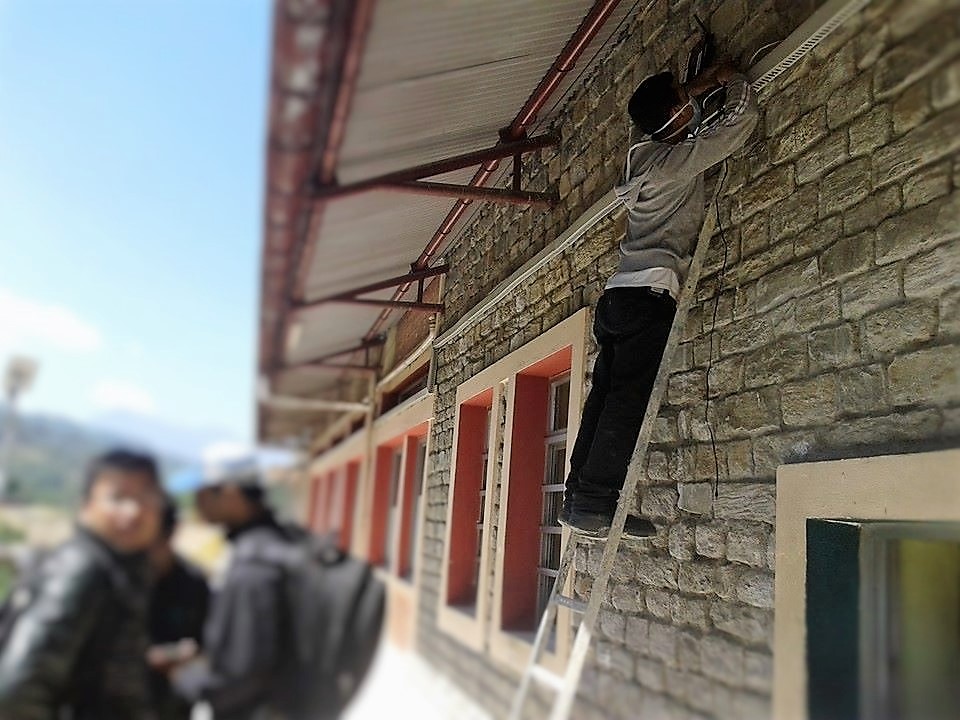 On the 12th of April 2015, a devastating earthquake hit Nepal, including its capital Kathmandu, demolishing half a million buildings, killing 8.800 and injuring over 16.000 people.

With most of the terrestrial communication infrastructure destroyed, the research and education network of Nepal, NREN, participated in the relief work by setting up emergency wireless networks at a number of hospitals treating earthquake victims.

DUMBO is designed for rapid deployment in post-disaster emergency conditions to aid the work of rescue workers. It either establishes a self-contained network in a specific area or can be interfaced with remaining networking infrastructure, e.g. satellite, Internet or 3G. DUMBO allows transmission of streaming video, voice and text messages.

“After we were hit by the devastating earthquake in Nepal everything was shattered. People lost lives, many lost their homes and some lost almost everything they had earned over the years. Bringing the situation to normal and waving up your helping hands for rehabilitation was quite challenging.

“The ground was still rattling and our families were still in pain, fearing when another bigger quake could occur and take their loved ones away. Many people left their homes and were dwelling in tents, hospitals were packed with casualties, communication services were halted – everything was a stop, it was a panic.”

“The next very day we started teaming up with our friends and we were looking out for areas to help. I got an email from my ex-teammates at IntERLab about deploying the DUMBOs to aid for a disaster recovery situation.

“It was a boon to me – people hardly get to utilize things in real that they learn in their academic career. Me and my teammates at NREN made plans to visit at least few hospitals for deploying the DUMBOs sent by IntERLab. We received 44 DUMBOs which was carried by a Thai Volunteer Doctor.”

“We planned to deploy 10 set of DUMBO routers at Dhulikhel Hospital which is 25kms away from the capital city – Kathmandu. Dhulikhel hospital is a community hospital which received patients from many nearby districts as well.

“So after the quake a large number of patients were transported to the Dhulikhel Hospital for the medical support. When we reached the hospital, we saw a crowd of patients and medical teams rushing to and for serving them. Communication was not easier with faint mobile signals and a congested network, I hardly received a phone call from my mother while I was at the hospital.”

“DUMBO routers which used SIP were the best option to make phone calls within the hospital periphery. Since we had a limited amount of equipment we had to choose locations carefully to place the routers and fine tune them in order to make them work with maximum efficiency.

“The next was setting up the SIP clients on the mobile phones for doctors and other medical teams assigning them a phone number.”

“The doctors were astonished to see something deployed so quickly under such a panic. It was really a plug and pay kind of thing – thanks to the InterLab teammates who made it so easy for us. Our first success in Dhulikhel Hospital.”

“We then planned to visit Gauri Shankar General Hospital of Dolakha district which was situated about 150 kms away from the Kathmandu. We did the motorcycle ride to get there. It was a small community hospital as was in remote areas of severely affected district.

“The hospital was full of patients where a doctor and 7-8 nurses were serving every one of them. Mobile phones were just a toy in their hand – no signals, no communication possible.

“As in the previous case, we walked through the hospital periphery, chose the best locations to place the routers and installed the SIP clients on the mobile phones of the doctors, nurses and even some emergency patients.”

“We got kind feedback from all of them as it proved to be quite fruitful during those conditions. At the next very day, we have deployed two sets of DUMBOs in Kirtipur Hospital and Nepal Army Hospital of Kathmandu Valley. We felt the smile in the faces of Doctors and medical teams.”

This is a shortened version. For the full story please go to: http://dumbo-isif.interlab.ait.asia/nepal.