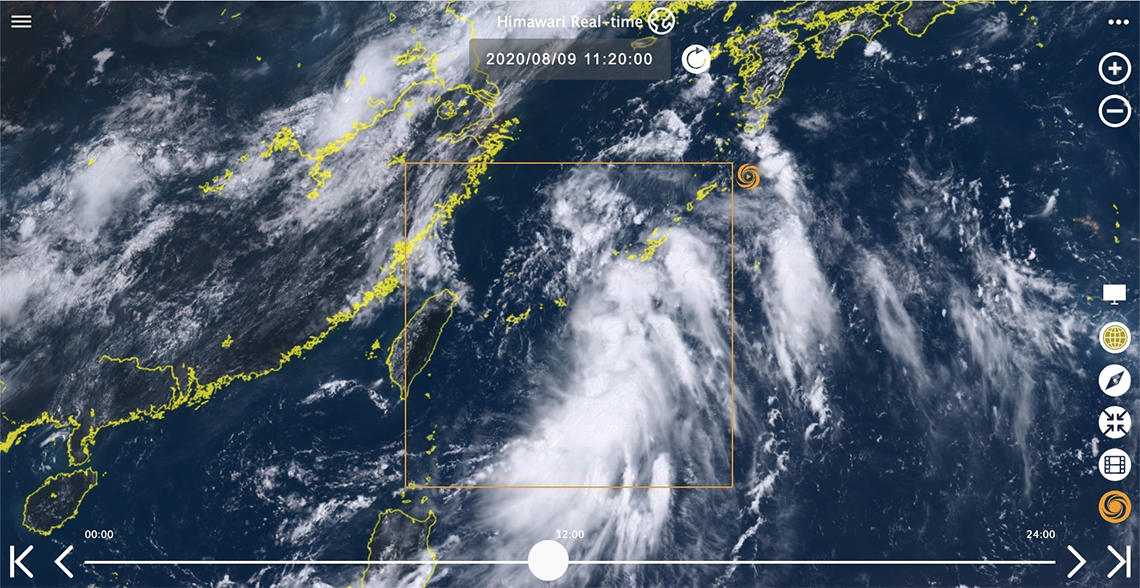 Helping Asia and Oceania forecast and respond to climate disasters

Featured image: Screen shot of a satellite image from the Himawari Real-time app

“Himawari Real-time” is a real-time meteorological satellite data visualisation web application developed by Japan’s National Institute of Information and Communications Technology (NICT). The satellite images generated by the application show changes in weather conditions, such as the movement of typhoons, and are widely used in disaster mitigation and weather forecasting. Usage of the Himawari Real-time app, in Japan and globally, has been steadily increasing year by year. When a large typhoon is approaching, usage can reach 1 million accesses per day.

What powers this massive data load is the High-performance and Flexible Protocol (HpFP), a high-speed data transfer protocol suitable for broadband and high-latency networks developed by the researchers at NICT. It connects Himawari Real-time to the Himawari Cloud of the Meteorological Satellite Center, the Japan Meteorological Agency (JMA) and the Spatial and Temporal data Analysis and Reference System for GIS (STARS4gis) within NICT via a L2VPN network. Layer 2 VPNs are a type of virtual private network (VPN) used for the transmission of data. Using the L2VPN, geographically remote computers are connected as if they are operating in the same local network.

And the vital connectivity underpinning Himawari Real-time does not stop there. NICT also developed the Joint Usage/Research Center for Interdisciplinary Large-scale Information Infrastructures (JHPCN) Wide Area Distributed Cloud, hosted on the L2VPN on the JGN (Japan Gigabit Network) (Fig.1 below). This Cloud connects several research facilities: STARS4gis in NICT, the Center for Environmental Remote Sensing (CEReS) in Chiba University, the Academic Center for Computing and Media Studies (ACCMS) in Kyoto University, the Research Institute for Information Technology (RIIT) in Kyushu University, and the Integrated Intelligence Center in Shinshu University.

By distributing web servers to each of these sites, there is excellent redundancy and load balancing. This enables the uninterrupted, continuous operation of Himawari Real-time – not even a power outage caused by typhoon winds can bring it down. A high-level of availability is vital for the users who rely on the information for monitoring weather patterns and mitigating climate disasters. Fig. 1: Wide Area Distributed Cloud based on the L2VPN on JGN

To further improve access to the Himawari Real-time web application satellite imagery in the Asia Oceania region, NICT has launched mirror sites in Thailand, the Philippines, and Taiwan (Fig.2 below). Mirroring requires quasi-real-time data transmission from NICT powered by high-speed research and education networks in the Asia-Pacific, including the JGN international links. The NICT-developed data transfer protocol HpFP has also proved to be effective here. Even in high congestion conditions, HpFP delivers high performance compared with the legacy protocols, such as TCP CUBIC.

Real-time warning and alerts on the go

The Himawari Real-time application is provided by the NPO Solar Radiation Consortium as a Smartphone application, available to download from the Apple App Store and Google Play (Fig.3). To date, there have been more than 10,000 downloads in Japan and globally. The app is available in 12 languages: Japanese, English, Korean, Chinese (traditional and simplified), Indonesian, Burmese, Thai, Russian, French, Tetum, and Malay. In 2019 and 2020 the app got over 3 million hits. Half of these are from outside Japan, illustrating how critical this information is to the entire Asian and Oceania regions.