Looking inside the Earth

The Earth is a complex and dynamic system, and the inner workings of our planet have serious catastrophic potential for humans in the form of earthquakes and volcanic eruptions.

Using e-infrastructure resources and supercomputers, a research group at the University of Oslo, Norway, is investigating the link between processes which occur deep in Earth’s interior, and those at the surface, aiming to better understand the workings of our planet and to unravel the clues as to how earth has evolved to the remarkable planet that it is today.

While the interior of the Earth cannot be directly observed, much information about its structure has been derived from global seismic tomography studies.

Based on mathematical similarities with the medical ‘CAT’ scan x-rays, seismic tomography provides key observational constraints on the present state of heterogeneity within the Earth. Such studies have revealed a radially stratified Earth, separated into the crust, mantle and outer and inner cores. 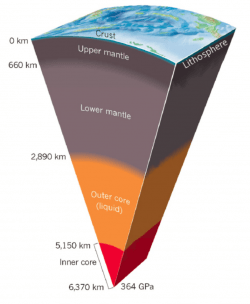 Quantitatively, the mantle represents Earth’s most significant layer, comprising nearly 84% of the planet’s total volume and 67% of its mass (left: Earth’s interior (Duffy, 2011).

Understanding the complex structure and dynamics of the mantle is a fundamental goal for researchers at the Norwegian Centre for Earth Evolution and Dynamics (CEED), as mantle behavior has important implications for numerous aspects of Earth and space sciences, including earthquake mechanisms, volcanic systems, planetary evolution and climate change.

The nature of mantle convection can be described in mathematical models. This branch of Earth science dealing with numerical modeling has greatly evolved in the past decade.

As a result, detailed computer models of the mantle now exist and the dynamics of the deep Earth can be explored through high-resolution computer simulations.

Utilizing detailed numerical codes that describe mantle convection and other dynamic Earth processes, a versatile team of researchers at CEED use the supercomputers Abel at the University of Oslo and Stallo at the University of Trondheim to create intricate computer models of Earth’s interior.

Such numerical models can be used to study the evolution of a planet and its role on current surface observations. It is this evolution of the mantle that CEED researchers are interested in.

Exactly how did Earth’s mantle come to have the structure that it has today? Has the mantle always looked the same, or has it evolved through time due to convection?

Indeed, a fundamental mission of the research centre is to develop an Earth model that explains how mantle processes drive plate tectonics.

With this goal in mind, a method to integrate data from several geo-disciplines into high-resolution numerical models of the mantle is now being employed at CEED, by combining the complementary techniques of seismology, geochemistry, and palaeomagnetism. Due to the inaccessibility of the deep Earth, such a multidisciplinary approach is crucial.

At CEED, strong numerical skills combined with cross disciplinary geological and geophysical expertise, and the accessibility of high-performance computing systems, such as Abel and Stallo, enables the creation of high-resolution, detailed dynamical models of our planet, and other bodies.

Through these models, CEED aims to better understand how the Earth has evolved to be the unique planet that we live on today.

Image at the top:
To simulate convection, the entire Earth is represented as a 3D grid consisting of several millions of points. Mathematical equations, which describe the physics of mantle convection, are repeatedly solved at each discrete point, allowing researchers to track several variables – including the temperature of the convecting material, its velocity and its composition. It takes several days to weeks to run a simulation, depending on the complexity of the model.

This is an excerpt from a story from meta magazine, published by UNINETT Sigma2

Join the conversation
Related articles
Earth Observation
The Armenian Data Cube: a successful collaboration for environmental sustainability
Earth Observation
Using satellite imagery to solve real world problems
Atmospheric science
Connecting students to Saildrone and Berkeley Lab
Climate Science
Citizen science: collaboration for water quality
Disaster Warning
Clearing the path to seismological data
This website uses cookies to improve your experience navigating our site. By continuing to browse, you are agreeing to our use of cookies. To learn more about how we use cookies, please view our Privacy policy.
OK, I Understand