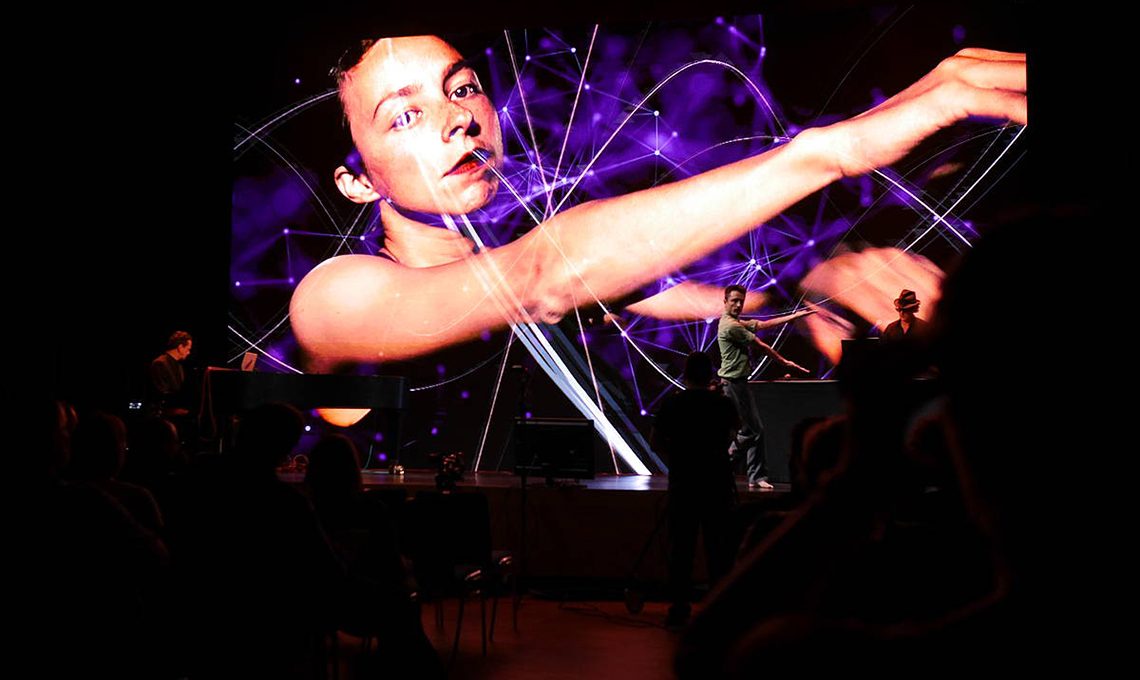 Make your own kind of music with R&E networks

The net:art project, spearheaded by the Austrian NREN ACOnet, is harnessing the power of audio-visual transmission technologies for the performing arts. Expanding the boundaries of this relatively new paradigm, net:art has produced three “near in the distance” productions in Vienna.

Since 2013, this production series is an ongoing experiment on utilizing high technology in the performing arts. One of the long-term objectives of the production series is to enhance the expertise of the core team and create an open environment to share and transfer experience and know-how.

The latest net:art | near in the distance 3 was carried out in cooperation with many national and international partners and was performed in Brucknerhaus Linz on June 1st, 2017. There were two performances. A 30-minute short version was presented at TNC17, Europe’s preeminent scientific networking conference. This was followed by an 80-minute performance for the general public. A total of over 400 people “attended” the shows. Both performances were live streamed, to an audience of 350 visitors from 26 countries. A photo gallery offers insights into what went on behind the scenes in Linz, Barcelona, Prague, and Rome.

Similar to the previous net:art production in 2015, multiple locations all over Europe were successfully interlinked via high-performance data networks. For net:art| near in the distance 3 though, two different low-latency transfer technologies were applied in the same performance. This includes LOLA (Low Latency AV Streaming) technology, initially conceived in 2005 in a joint development of the Conservatorio di Musica Giuseppe Tartini in Trieste Italy and GARR, Italy’s NREN. UltraGrid software, a project of CESNET and SITOLA (The Laboratory of Advanced Network Technologies) for low latency and high-quality video, was also deployed. The challenge was to integrate these technologies into a single performance and manage the required system specification differences. The reliability of these two transmission technologies was made even better with the outstanding support of both development teams.

Another important objective of the project is to involve artists in locations that only have access to comparatively low bandwidths – not only to check compatibility but to support artistic processes wherever they occur and under any conditions. By pushing the envelope and experimenting in real-time, the project hopes to learn from both its successes and failures. For near in the distance 3, an attempt was made to connect two artists via conventional technologies. The connection to the percussionist in Mumbai failed shortly before the performance. However, the acoustic transmissions in Hailuoto, Finland worked as planned. This “live laboratory” serves as a learning and collaboration tool to advance further developments.

Productions of this magnitude require significant preparation. Locations with suitable connectivity must be identified, and partners must be attracted and recruited.

The essence of the net:art| near in the distance series is much more than faster transmission and higher bandwidth. It is about bringing people closer, near to one another, enabling artists to interact with one another and their audiences, despite the distances that separate them. And using the performing arts to bridge both digital and cultural divides.

“The quality of your productions continues to amaze us! These are really beautiful and compelling videos. Congratulations on a wonderful and engaging performance that actually makes the networked component an added aesthetic vs. an exercise in technology. […] it is one of the best examples of this work in practice I have ever seen. Bravo!”
– Justin Trieger, Director of New Media and Distance Learning, New World Symphony, America’s Orchestral Academy (Miami, FL)