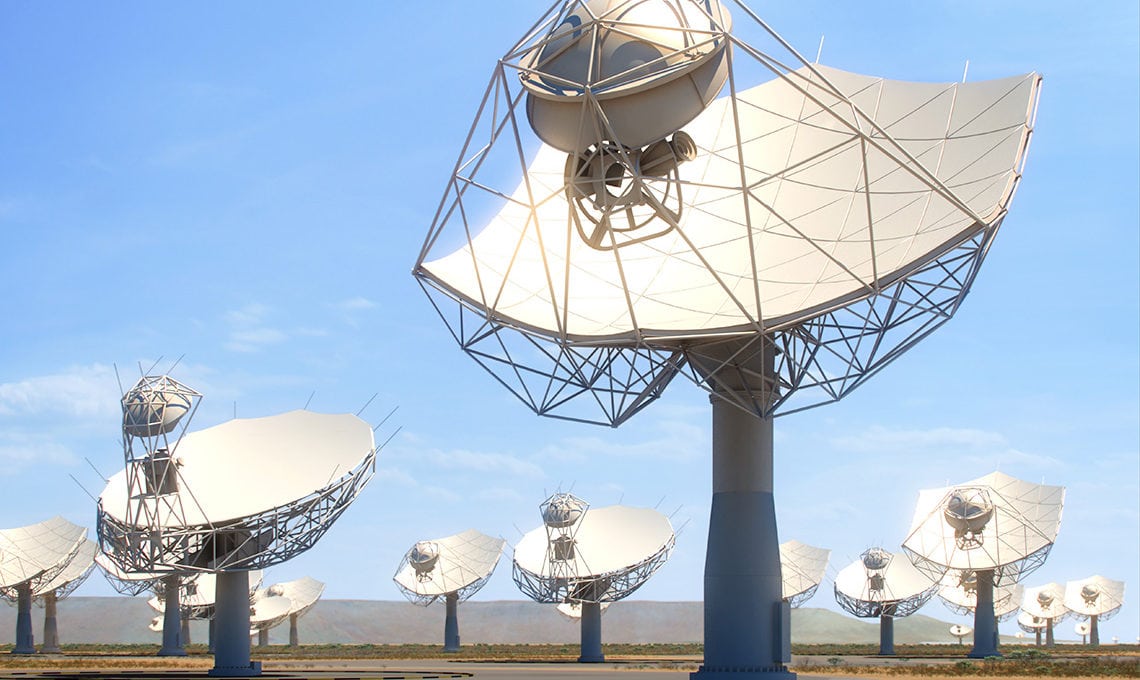 The construction of SKA has just begun and will continue until 2027. In both Australia and South Africa, the challenge is not only to build the telescopes but also to provide the necessary high-speed bandwidth.

“The biggest challenge is the remoteness of the site. Because there is nothing out there other than the instrument, there are no economies of scale. This means it works out more expensive than laying the fibre from Cape Town to Johannesburg, even though it is about half the distance,” says Shukri Wiener, head of network engineering at TENET, the national research and education network (NREN) of South Africa.

Data processing around the globe

The long-term plan, to be aligned with the build of the full SKA instrument, is to lay down dark fibre, which will allow scalable and sustainable high-speed connectivity. This work, like the core backbone network which forms the national research and education network, is funded through a combination of public and private sources. It is operated through a collaboration between TENET and SANReN (South African National Research Network).

“The SANReN team lay the long-haul circuits, they will procure and put down the equipment to connect the SKA site Carnarvon in Northern Cape. Once the equipment is laid, TENET then operates it, liaising with the SKA scientists and engineers,” explains Shukri Wiener, TENET, continuing:

“As the operators of the network infrastructure we work closely with the South African Radio Astronomy Observatory, which is the South African SKA team, on the transportation of data from the instrument to their various sites nationally and then internationally where the data is processed by scientists around the world. They tell us how much data they need to transport and how quickly, and we design a transport network between the relevant sites.”

The project is working to lay dark fibre between Johannesburg and Cape Town, and already has dark fibre for the national backbone in place, to Carnarvon. To illustrate the magnitude of the challenge, a single SKA telescope dish will produce data at a rate comparable to all internet traffic in the early 2000’s. Handling the massive data sets has therefore been described as the biggest “big data” challenge in science.

“The SKA instrument is game-changing, and it is a privilege to be able to support such an incredible endeavour. The positive knock-on effects of this project taking place in South Africa will extend far beyond scientific discoveries,” Shukri Wiener concludes.