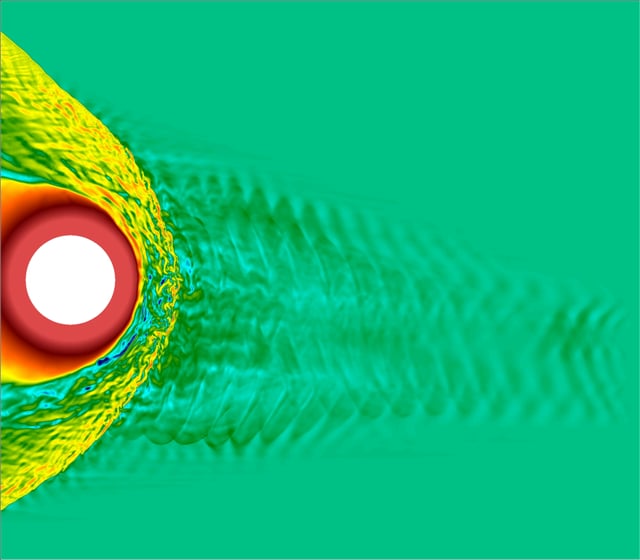 As computer simulations go, Vlasiator is as huge as they come. Developing Vlasiator, Minna Palmroth, professor at the Finnish Meteorological Institute, has succeeded in doing what many of her colleagues thought impossible: Simulating weather in near-Earth space, showing how solar wind affects us, using high performance computing and high speed networks to do so.

Understanding near space is important: it affects the reliability of technology in satellite orbits and also, for example, electrical grid and geolocation technology.

Solar wind is constantly being emitted from the sun. On its way through space towards Earth solar wind is being blocked by the Earth’s magnetic field, like a stone in a stream, with the current flowing around it.

A variety of interesting and hard-to-predict phenomena form around that stone, and it’s these phenomena the Vlasiator software is simulating.

Prior to Vlasiator, researchers had only been able to do local simulations covering a small region in space. It was thought impossible to do a large scale simulation. Space weather phenomena occur on a huge scale compared to any other computer simulation.

An accurate simulation has to include solar wind, the entire near-Earth region and Earth’s upper atmosphere also. Adding to the magnitude of the physical scale, the space weather phenomenon in itself is vastly complex, demanding the simulation to be accurate both in a small and large scale.

The task was so massive, that the Finnish research team could only perform the simulation using high performance computing, made available through the Partnership for Advanced Computing in Europe, PRACE.

Now, supercomputers can run the most accurate space weather simulator in the world. But having achieved this, Minna Palmroth and her team have already set their sight on a new goal.

Right now they are developing the next generation Vlasiator, an even more accurate and more computationally optimised 3D version of the original model.

Space weather has an impact on Earth’s surface, and it may affect technology as well. Communication and transportation can be disrupted by solar storms. Also, space weather probably influences weather and climate on Earth, although scientists struggle to understand these complex phenomena precisely.

At worst, space weather could cause catastrophes on Earth: stop air traffic, damage satellites, and shut down electricity grids and communications networks. The most powerful solar storm in recorded history was the Carrington Event in 1859.

An English amateur astronomer was observing the sun just before the storm began. He noticed an enormous solar flare. The flare exploded and, 17 hours later, the telegraph wires started to spark and telegraph offices caught fire.

Gold prospectors in the mountains woke up in the middle of the night because they thought it was morning – the auroras were so bright. Auroras were visible as far away as the Caribbean.

If a comparable solar storm were to surprise us now, both its direct and indirect impacts would be massive: people could end up without electricity, networks could go down. At worst, nuclear power plants like Fukushima could overheat due to a lack of emergency power.

This blog post is an edited version of news items published by the Finnish research and education network CSC and by the Gauss Centre for Supercomputing.