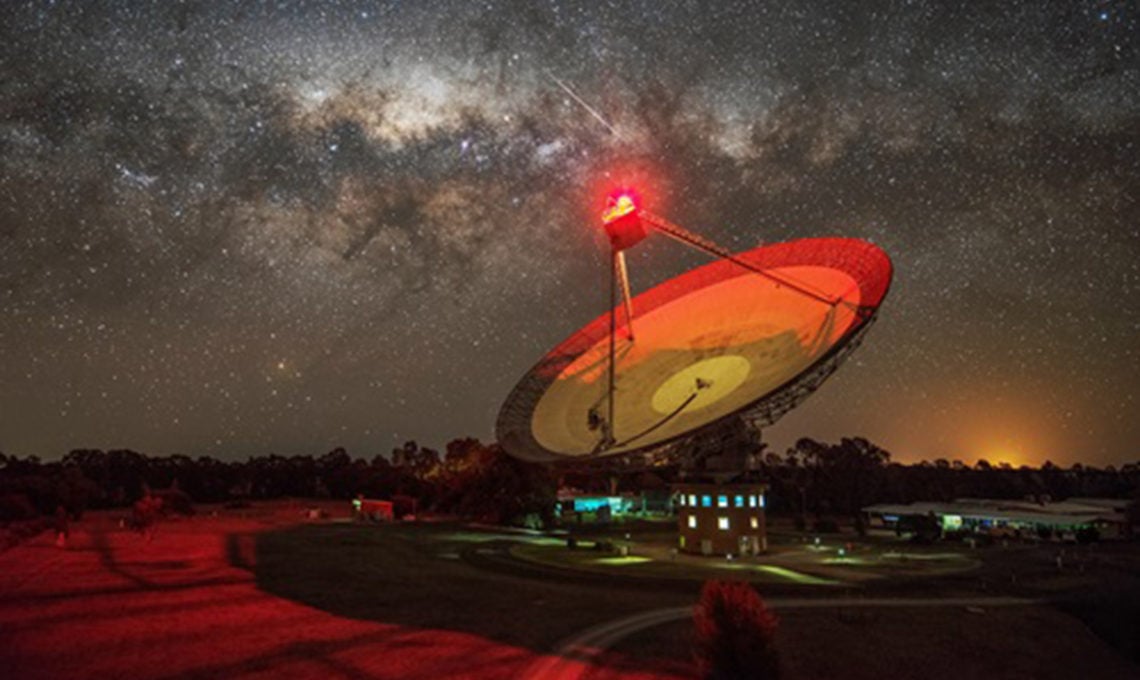 Albert Einstein’s theory of general relativity has informed our understanding of gravity for more than 100 years. During this time, it has also been subject to rigorous testing by researchers, to see if holds true under different circumstances.

Dr Dick Manchester, a Fellow at Australia’s national science agency, CSIRO, is a member of an international research team that used telescopes around the world, including CSIRO’s Parkes radio telescope – Murriyang, to complete the most challenging tests yet of Einstein’s general theory of relativity.

The team also used AARNet, Australia’s high-performing national research network, to transfer large-scale data captured from the Parkes radio telescope to CSIRO facilities in Sydney and Canberra and to supercomputers for analysis, including OzSTAR at Swinburne University.

Led by Professor Michael Kramer from the Max-Planck-Institute for Radio Astronomy in Bonn, Germany, the team showed that Einstein’s theory published in 1915 still holds true.

Dr Manchester says this result provides us with a more precise understanding of our Universe.

“The theory of general relativity describes how gravity works at large scales in the Universe, but it breaks down at the atomic scale where quantum mechanics reigns supreme,” he said.

“We needed to find ways of testing Einstein’s theory at an intermediate scale to see if it still holds true. Fortunately, just the right cosmic laboratory, known as the ‘double pulsar’, was found using the Parkes telescope in 2003.

“Our observations of the double pulsar over the past 16 years proved to be amazingly consistent with Einstein’s general theory of relativity, within 99.99 per cent to be precise,” he said.

The double pulsar system is made up of two pulsars, rapidly rotating compact stars that emit radio waves like a cosmic lighthouse and create very strong gravitational fields. One star rotates 45 times every second, while the second spins just once every 2.8 seconds. The stars complete an orbit every 2.5 hours.

According to general relativity, the extreme accelerations in the double pulsar system strain the fabric of space-time and send out ripples that will slow the system. The two pulsars are predicted to collide in 85 million years’ time.

With such a long timescale for this energy loss its effects are difficult to detect. Fortunately, clock-like ticks coming from the spinning pulsars are perfect tools to trace the tiny perturbations.

Associate Professor Adam Deller from Swinburne University and the ARC Centre of Excellence for Gravitational Waves (OzGrav), another member of the research team, explained that the ticks from the pulsar ‘clocks’ had taken around 2,400 years to reach Earth.

“We modelled the precise arrival times of more than 20 billion of these clock ticks over 16 years,” Dr Deller said.

“That still wasn’t enough to tell us how far away the stars are, and we needed to know that to test general relativity.”

By adding in data from the Very Long Baseline Array – a network of telescopes spread across the globe – the research team was able to spot a tiny wobble in the star’s positions every year, which revealed their distance from Earth.

“We’ll be back in the future using new radio telescopes and new data analysis hoping to spot a weakness in general relativity that will lead us to an even better gravitational theory,” Dr Deller said.

The research was published on 13 December 2021 in the journal Physical Review X.